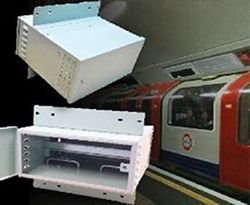 The London Underground, part of Transport for London, carried 1.26 billion passengers in the last year, making it one of the busiest networks in the world. To help keep it running smoothly, Verotec, the specialist electronic enclosure manufacturer, used its TecServ+ Project Service operation to design and manufacture bespoke enclosures used to house some critical switching and interfacing equipment.

The TecServ+ operation is particularly useful in turning a rough concept requirement into a physical product. Tim Armstrong, Verotec commercial director, said, “We have a huge amount of experience in turning an idea into reality. In this case, by working closely with our customer from the inception of the project through to the final manufacture, we were able to provide them with a bespoke enclosure design on time and within budget.”

Need more? Contact us and we can arrange a visit or direct you to the appropriate product site. Most products are available to be sampled and a quotation based on your volume usage can be arranged. A simple click below will get you all of the current contact information.